The SPO is accepting nominations for the Hawaii Procurement  Excellence Award in recognition of:

The SPO invites all State/County Departments and Agencies to nominate a procurement/purchasing professional who has made such noteworthy contributions.  To be eligible for the Procurement Professional Excellence Award, the candidate must

All nominees will be invited to be recognized at an awards luncheon as part of SPOCon on Wednesday, October 16, 2019, at the Hilton Waikiki Beach Hotel. During this event, the winner of the Hawaii Procurement Excellence Award will be named.  Agencies/Departments may name multiple nominees; each nominee must be submitted on a separate application.

For more information, please refer to the application form. 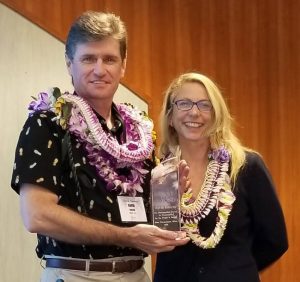 In December 2017, the Hawaii Foreign-Trade Zone switched on its new solar energy system: a 300-kilowatt photovoltaic system comprising 1,070 individual panels, mounted on a hazmat roof containing asbestos, on a building that was constructed in 1954. Pacific Business News called it the “largest solar PV system in Honolulu’s business district.”

David Sikkink began his effort to source clean energy for the Foreign-Trade Zone in 2011 when he was Acting Administrator.  From his days as the Zone’s Business Manager, David knew that energy costs consumed one-third of its operating budget. The Foreign-Trade Zone is 100 percent self-funded through revenue from its program activities, and takes no monies from the State’s general fund. David was determined to reduce this ongoing burden, and to do his part for Hawaii and the environment.

Over the life of the project, the system will save over $1,000,000. The solar energy system has already saved 200,000 kilograms of CO2 emission, equivalent to planting 11,000 trees.  Leading by example, David paved the way for other State agencies, such as the Natural Energy Laboratory of Hawaii Authority (NELHA), to plan its own solar energy system, and the Hawaii State Energy Office to explore installing PV on the entire Pier 2 building. His work demonstrates one way Hawaii can achieve its 100 percent renewable energy goal. 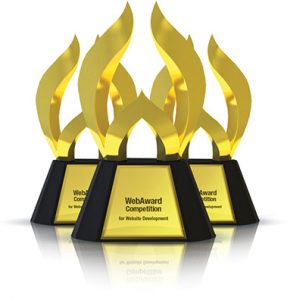 The Hawaii Awards & Notices Data System (HANDS) won the 2018 Webaward for Outstanding Achievement in Web Development from the Web Marketing Association.  The project team included staff from the State Procurement Office and the Hawaii Information Consortium, LLC, dba eHawaii.gov.  Congratulations the team members who worked directly on HANDS and also those who supported the team indirectly.

Since 1997, the Web Marketing Association’s annual WebAward Competition has been setting the standard of excellence for Website development. Independent expert judges from around the world review sites in 96 industries. The best are recognized with a WebAward which helps interactive professionals promote themselves, their companies, and their best work to the outside world. The WebAward Competition is the premier award recognition program for Web developers and advertising agencies. 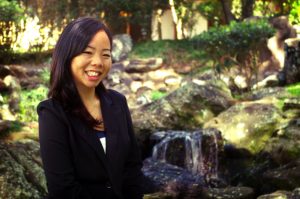 In August 2018, the SPO awarded scholarship funds for professional development through the Alaska-Hawaii Government Procurement Association (AHGPA) to Starla Takata, a Procurement Specialist for the City and County of Honolulu.  Starla will use her scholarship to prepare for the Certified Professional Public Buyer (CPPB) exam.

“Becoming a Certified Professional Public Buyer is one of my current goals that I hope to achieve in the next two years,” Starla said.  “Through the scholarship, I have the opportunity to further work towards my goal by enrolling in a CPPB assessment tool. With the assessment tool, I can be more prepared and confident when taking the exam. Obtaining certification means a lot to me, which is why I am so thankful for the opportunity,” she added. 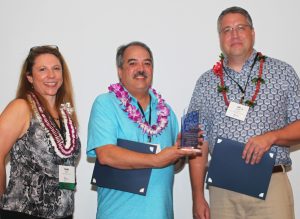 SPO Administrator Sarah Allen presented the 2017 Procurement Professional Team Award to the County of Hawaii Purchasing Division.  The team was selected from three nominees who were recognized by their departments for being extremely hard-working, dedicated and passionate professionals in government procurement.

The team is the County of Hawaii’s Purchasing Division which serves its twenty‐one departments and agencies. Annually, the Division processes approximately 150 invitations for bids and requests for proposals, 800 requests for quotations, and is responsible for assisting the Chief Procurement Officer (Finance Director) with the day to day operations of a centralized procurement system. 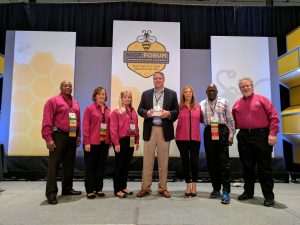 Jeff Dansdill, CPPPO, CPPB, Senior Contract Manager for the Hawaii Health Systems Corporation, was awarded the 2017 National Institute of Government Procurement (NIGP) Volunteer Award for his work in starting the Alaska-Hawaii Governmental Procurement Association (AHGPA). The newest NIGP Chapter, and NIGP’s first virtual chapter, AHGPA currently serves more than 80 procurement professionals in the 49th and 50th States.  Jeff was elected as its first president and works with a team of dedicated professionals from both states to provide professional development opportunities and a place for procurement professionals to connect. 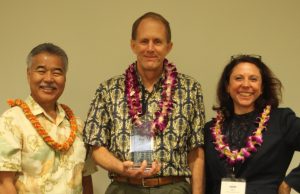 During the Inaugural SPOCon in October 2016, the SPO announced Greg King as the winner of the Inaugural Hawaii Procurement Professional Excellence Award. Greg, the Central Purchasing Agent for the County of Maui, was presented the award by Governor David Y. Ige and SPO Administrator Sarah Allen. Greg was selected from seven nominees who were recognized by their departments for being extremely hard-working, dedicated, and passionate professionals in government procurement.

During FY16, Greg’s team processed over $84 million in goods, services and construction, and 25,000 pCard transactions. Their cost avoidance measures were estimated at $1.2 million.

As Maui County’s Central Purchasing Agent, Greg educated the County Council and the County auditor on the overall value and savings generated by the pCard program. Greg has conducted numerous training sessions for various county groups on procurement policy and procedures and is an instructor in the County Supervisor training academy sponsored by the County of Maui Personnel Division.

Greg carries himself with impeccable leadership and professionalism and is sought out for guidance and direction by his colleagues at both the county and state levels.  He has been appointed to the Procurement Policy Board numerous times.  As a member of the PPB, Greg assists the State Legislature in reviewing and passing rules developed by the State Procurement Office as a result of new legislation passed by the Legislature. He most served as the chair of the PPB from 2012 to 2017, and from 2005 to 2008, in addition to being a member from 2000 to 2008.

In addition to having a full-time job, Greg is a dedicated member of his community. He has volunteered in various community activities over the years, including the Leukemia Society, the American Heart Association, Community Work Day, Maui Academy of Performing Arts, and the Alzheimer’s Association. 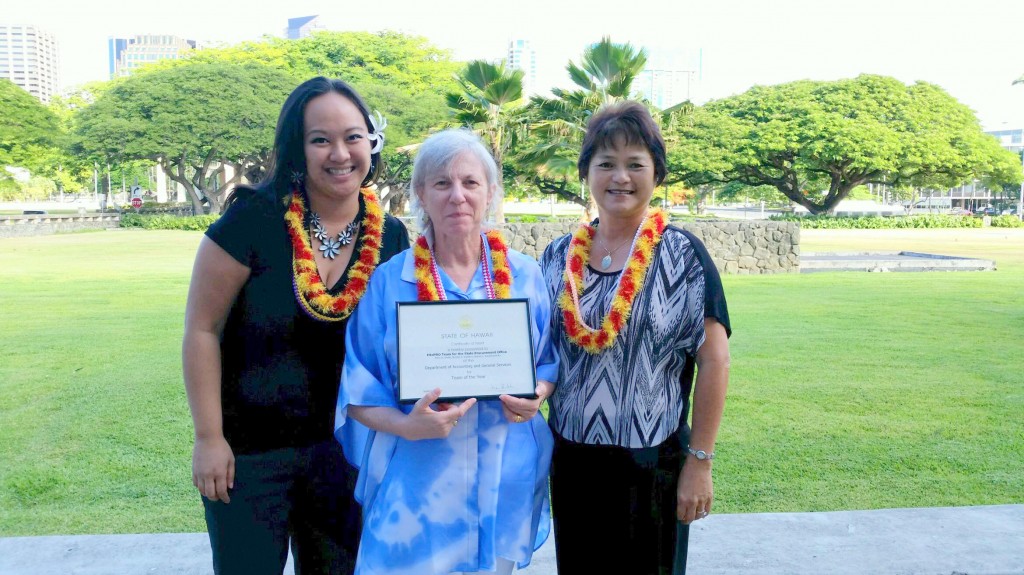 DAGS’ HIePRO Team of Mara Smith, Bonnie Kahakui and Stacey Kauleinamoku, was named State Team of the Year in October 2014.   To increase the level of transparency through which the state procures goods and services, the team developed the State of Hawaii eProcurement system for issuing solicitations, receiving responses and issuing notices of award. As of April 2014, 156 procurements had been awarded on HIePRO, totaling more than $8.6 million, with an estimated cost savings of more than $1.3 million.

“These individuals have selflessly given of themselves to enrich the lives of those they serve,” Gov. Abercrombie added. “Their accomplishments perpetuate the aloha spirit and make our state a special place to live and work.”

The Team of the Year, Manager of the Year and Employee of the Year were selected from 51 exceptional individual and group nominees. A volunteer selection committee of five prominent members of the community carefully reviewed nomination packets and rated them according to defined categories. The committee then presented their recommendations for the three awards to Gov. Abercrombie.